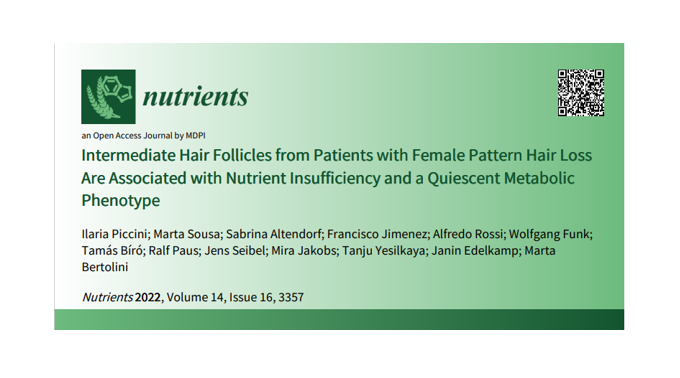 People throughout all cultures care greatly about keeping their hair healthy and strong, and the array of hair care products is continuously expanding. Whilst wash and care hair products might be enough for maintaining hair fiber health, more specialist treatments are needed for preventing hair loss. In this regard, nutritional supplementation is often recommended as an adjunct treatment strategy. Even though it is known that, for example, systemic vitamin- or iron-deficiencies correlate with hair health and growth, it remains unclear whether and how these deficiencies are implemented within the human hair follicles (HFs) of individuals suffering from hair loss disorders.

In this study, we found that intermediate HFs from both affected and unaffected scalp regions of FPHL patients, are characterized by a nutrient and metabolite deficiency. Interestingly, the missing micronutrients and metabolites were either important in processes responsible for energy generation, or were essential amino acids and vitamins, all of which are involved in regulating cell growth.

Whether supplementation with nutraceuticals can really affect hair growth is dependent on the ability of the HFs to take them up from the blood stream. As a proof-of–principle, we supplemented the medium of intermediate HFs with nutrients typically found in hair growth supplements and saw that the HFs were able to absorb them. Therefore, our findings suggest that nutraceutical supplementation as adjunct therapy has the capacity to provide a benefit to patients suffering from FPHL.